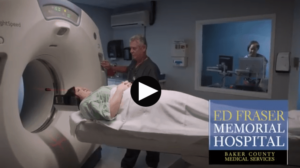 Ed Fraser Memorial Hospital in Macclenny, Fla., engaged BroadBased to create a 12-month integrated marketing plan that includes elements of broadcast television, radio, outdoor, online advertising, and a new social media presence. We teamed with CROP Creative Media in Jacksonville to produce a series of successful television and radio spots for the hospital, which is owned and operated by Baker County Medical Services (BCMS). But the element of the campaign that most surprised the client with its effectiveness was the social media component.

“BroadBased has done a great job overseeing the design and execution of our 2014-2015 marketing campaign,” said Dennis Markos, CEO of Baker County Medical Services. “It was their emphasis on a social media component that really set them apart during our interviews. They were adamant that we would experience significant lift by participating in the social realm, and they were right.”

← Taking aim at ‘retargeting’
What a card! →

Curious about which tool is right for you? Reach out and we’ll get in touch asap.